My name is James Thomas, and I have been drawing since I was a little boy. I remember sitting on the kitchen floor with a crayon and a piece of construction paper, drawing dinosaurs and making growling noises. I remember that all through school I ignored the teachers and drew on my notebooks instead. (Maybe I should've paid attention? LOL) I wanted to be an aritist.

Of course life doesn't always turn out the way you want it to. I went through some hard times, and it looked like I was going to have to give up on my dream. People thought I would never make it, and I hate to say it, but at one point i even lost sight of the vision myself.

When I was in my twenties, a friend suggested that I try drawing caricatures. I bought a few books on the subject and began to practice in my spare time. Could I make something good happen with this?

Something amazing happened in 1998. It was the bravest thing I had ever done at the time. I got on an airplane and flew to San Cristobel, Venezuela, with a group of traveling ministers. One of the nights of the trip, the group held "church" on the street, in a poor neighborhood of the city. The musicians were playing guitars, and drums; the singers were lighting up the night with their beautiful voices, and the preachers were speaking unforgettable words to the crowd that gathered. I felt like a bump on a log, with nothing to do, but I wanted to contribute.

On the spur of a moment, I pulled out my sketchbook and began drawing some People, who were seated nearby. In no time at all I was mobbed by a crowd of kids and parents who wanted their picture drawn. The word spread quickly that there was an artist "dibujando" (drawing). The drawings were a big hit with the people who lived there and the other members of the group.

After that I was invited on many short term trips, and I always brought my sketchbook with me.

It was fun drawing caricatures and the people loved them.

I've drawn caricatures in many different parts of the world: Venezuela, Mexico, Peru, Haiti, Cuba, France, Uganda, the Philippines, Israel, and more. Most of these trips were with church groups and charity events as a volunteer.

Flash forward a few years. I sold some caricatures on ebay. I also found the International society of Caricature artist and found out that there are many people making a living from drawing funny faces of people. I have started this website as a part time business, and I plan to grow it into a full time service for anyone that would like a funny drawing done.

I was just recently offered a chance to work at Walt DIsney World in Orland Florida, drawing caricatures for people. It'll be an exciting learning experience. My family and friends are cheering me on, and with every drawing I'm getting a little better.

Maybe yours is next!

I have also written a Kindle ebook, and I plan to write more. I must warn you though, my first book is a kind of crazy, out of the box, story that is not for everyone. Although, every one who has read it, so far, has liked it. My next ebook will be more of a young adult novel with some fantasy action adventure elements to it, and I plan on illustrating it.

click on the link below to see my Amazon book page

Right now I'm in the Polk county area in Florida, but I might be moving closer to the beach soon. I'll update the website when I do. But never fear, I'm willing to travel anywhere for caricature Gigs.

That's me on the right, with the rifle, in the wild bunch photo. I promise that I don't dress like this when I'm working! Lol

Here are some caricatures of me by myself and other artists 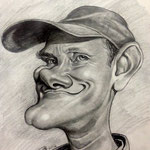 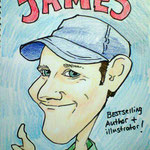 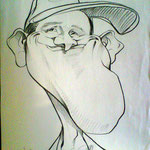 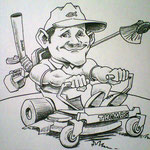 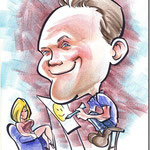 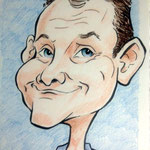 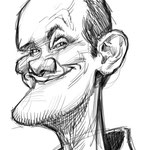 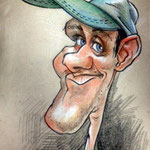 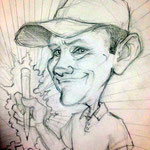 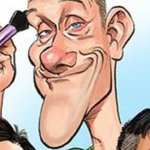 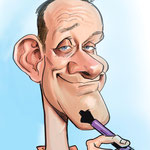 Here's a photo of me drawing caricatures in Venezuela

You will be 100% thrilled with your art, or it’s FREE. This is my personal promise to you on all my artwork.

Warning: read this before buying a caricature online

The Gift That Blew Away a Famous Artist!

The Little Duckling That almost didn't make it.